I was having a tough time getting my UITableView to get into “Edit Mode” or editing style, as Apple calls it, when I touch the Edit button on my navigation bar. Â I solved it, but here’s a little back story first. Â I had my view setup in Storyboard, only it was a UITableViewController object, which doesn’t give me much control over extra elements and subviews, so I wanted to swap that out for a real view and use subviews containing my UITableView. Â This wasn’t too big a deal to do, just had to change a few things and setup a new view controller .h and .m files in Xcode. Â Because I didn’t have Â “self.tableView” inherited anymore by the previous UITAbleViewController (as that’s all built-in), I lost my delegates, outlets, datasource and edit button. Â Easy enough to fix, just setup some new outlets and properties.

So I got my tableView outlet setup and is used on the new table view object. Â I setup my datasource to use my main View Controller. Â When you highlight your main view in Storyboard, at the Connections Inspector, I made sure I had Referencing Outlets setup as shown below. Â It was the dataSource and delegates that needed pointing to the tableView property. Â (drag from there to the view in Storyboard to connect) 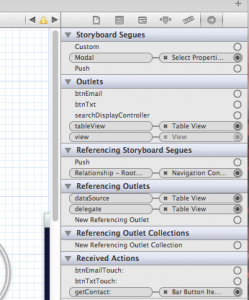 Assuming you have all the outlets setup, the table should display the data. Â In my case it was working fine up to this point, except the edit mode. Â The tableView method for “commitEditingStyle” was not firing. Â Of course, I didn’t have a button to edit on my nav bar either. Â That was fairly easy, just add this in viewDidLoad:

Above, I set my navigation controller (which my view is embedded in) to add a button at the left to be an Edit button. Â You could also set that on the right if you wanted. Â So , cool, I had an edit button on the nav bar. Â But, still no edit mode on my table view.

I knew my dataSource and delegates were working, because I had data showing from cellForRowAtIndexPath method. Â Adding NSLog entries to any of the delegate methods didn’t work. Â I even added :

None of them were working. Â Then I had a DUH moment. Â The button isn’t initiating the edit mode! Â  I was blaming the wrong objects. :) Â I found out that there’s a method for the UIViewController for setEditing. Â Adding this method was all I needed:

That was it! Â Edit button just worked like before at that point. Â :)